Ryan and Rhonda Newell’s home looks like something out of a storybook. The long, paved driveway introduces you to the 5-acre property, complete with stately white columns, lush green lawns and mature trees that tower over you as you make your way to their front door. Built during the “golden age” of St. Joseph—a period in the late 1800s when the city gained a nationwide reputation for prosperity due to wholesale trades to the west— the red-brick house is elegant, meticulously maintained and updated inside and out. It’s impressive, too—three stories, 12 bedrooms, two libraries and nine original fireplaces can be found in this 11,000-square-foot home.

“I don’t know what people were doing, building houses this big,” Rhonda laughed. “But it could not be any more perfect for our family.”

Ryan and Rhonda have 13 kids, ranging from 1 to 19 years old. But just a few years ago, their bustling household was considerably smaller. Living in St. Louis, they were a family of five, in a suburban home on the outskirts of the city.

“But then my wife came to me, and she said she wanted to adopt. And one thing led to another, and we ended up adopting a lot of kids from foster care—”

“—and through that transition, our hearts ignited.”

The family continued to grow, blessed by three more children that joined the Newell ranks a few years later. Although they were now living in a larger home near downtown St. Louis, Ryan and Rhonda recognized that they needed a better solution.

“We really looked for affordable houses in St. Louis, even tried adding on to our house. But with the rules and regulations in big cities, it’s difficult to do what you want on your property.”

Financial limitations had stalled their hunt for a dream house. And so, although they loved St. Louis, they decided to expand their hunt on Zillow.

It was affordable, too—far below the steep price tags of larger cities. There was just one issue: they knew nothing about the town.  They found St. Joseph’s Uncommon Character website online, where they found videos that urged them to make the move.

“The guy (in the video) was like an infomercial—are you tired of traffic in big cities, and small houses, and all these things—and I’m watching it, and I’m just like yeah, I am!” Ryan said.

For Rhonda, seeing the way the homepage spoke about community was one of her biggest selling points. Leaving St. Louis would mean leaving their church, their friends and their established relationships in the adoption community. Could they find something similar in a smaller town?

Their interest was piqued—it was time to see if it lived up to the hype. Moving, although a hassle, wouldn’t be entirely new for them. Ryan and Rhonda had both grown up with parents in the military, changing states, cities and even countries on the regular. And so, while the house and the town were beautiful, that wasn’t what struck them the most on their trip. It was the kindness and thoughtfulness of the people they met. When they went out to inspect the house, the sellers, Mr. and Mrs. Turk, had arranged it so they could meet their potential next-door neighbors.

And, although Rhonda and Ryan had not vocalized their concerns about moving their family to a predominately white town, Mr. Turk extended an offer to put them in touch with a good friend of his, a Black man who led diversity training for the sheriff’s department and served on the NAACP board. Ryan and Rhonda accepted, and they were both grateful for his insights.

“He told us that it’s a good town for all people and that there were two peaceful protests after George Floyd’s death. You really got the sense that this is a place where people are proud to be, where the community is united to making this a place where everyone feels safe and welcome. And from what we’ve seen and experienced, it’s true, this is a good place to raise a Black family.”

By the end of trip number two, they had fallen for the town and the Newell family was prepared to move. Not wanting to leave his current job, Ryan investigated the possibility of becoming a remote worker.

“I spoke to my boss. I said, listen, St. Joseph looks great for my family, and I think this needs to be our new home.”

Like many companies in 2020, Ryan’s work was already giving flexible work assignments, and within a few weeks, Ryan had a new position that was 100% remote. It’s been a smooth transition, and he was surprised how easy it was to make happen.

“I feel like I’ve discovered a gem—you can live wherever you actually want to, not just in big cities. I feel like I want to tell people to dream, like before I couldn’t imagine that you could live in the house you want, with the lifestyle you’re looking for and still have these big-city opportunities. I just wasn’t dreaming big enough.”

On the day of the move, the family saw further proof that St. Joseph’s claims of community weren’t just advertising—it was real.

Their new neighbors and their realtor went above and beyond to help them get settled and to answer any questions that came up. The neighbors even helped them move in, going as far as to carry boxes and put beds together.

“The people are just really, really nice. And I think that sometimes small cities get dinged for not being diverse enough, but the people in St. Joe are friendly, trusting… It’s special. Not all cities are like this,” Rhonda said.

While they still have more to explore in St. Joseph, memories have already been made at local shops and restaurants. They’ve tried the highly-rated schnitzel at the Cabbage Roll, vibrant cupcakes at Brioche Café and toured the Shakespeare Chateau, a house where (much to Rhonda’s delight) a Hallmark-like Christmas movie was filmed. 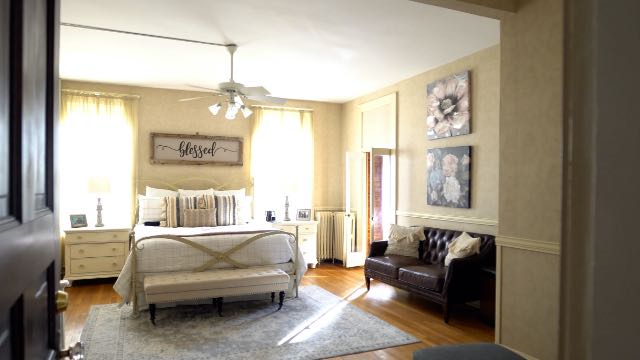 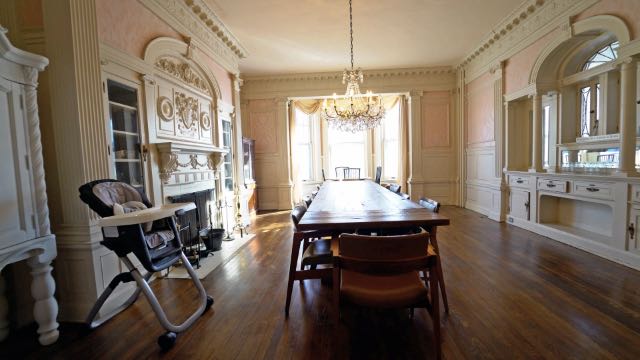 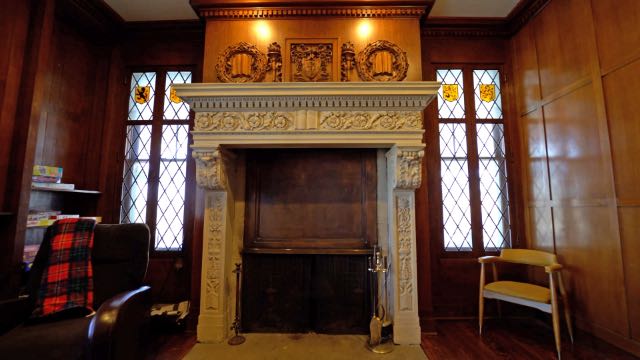 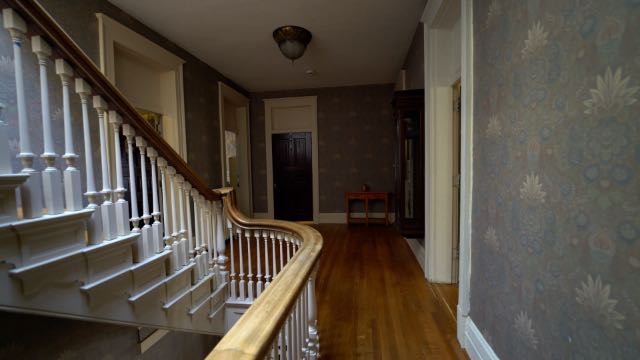 And the kids? A year into their move, the kids are doing great.

The oldest three hold part-time jobs and make the easy 45-minute drive to Kansas City when they feel like they’re in need of some big-city fun. But more often than not, there’s plenty to do in St. Joseph itself. The kids have gotten involved in after-school activities and sports, with the older boys playing flag football. St. Joseph has plenty of parks and outdoor adventures to embark on, but the Newells don’t need to go far for scenic views — they just open their own back door.

Their 5-acre property includes a stream and plenty of trees to climb. It’s like a dream they never even realized they had for their children, for them to all have so much room to play and discover, all while in the safety of their home. One night their sons invited their football team to come over, and the boys played laser tag on an elaborate homemade course late into the night.

Sometimes when Rhonda shares these types of stories with faraway friends, they ask if she lives in the country.

“No!” she laughed. “It’s the best of both worlds. If you go out our front door, it’s the main road. We’re still in the middle of the city!”

If that seems contradictory, maybe that’s just another example of how people really do live the “uncommon life” in St. Joseph. The Newells aren’t the only ones who see it — Rhonda’s sister came to visit and ended up purchasing a home just a few blocks over. After retiring from the military, she had been looking for the perfect city to buy a house for more than five years. When she saw the affordability and quality of life in St. Joseph, she knew she had found a place to call home. And the family will soon have more to celebrate, as Ryan’s mom is also house shopping in the area.

“None of this was planned!” Rhonda and Ryan were quick to add. “Everyone is just shocked by the standard of life that you can afford out here.”

Even a year in, it feels like they’re still discovering the joys of St. Joseph. Some, while small, have a huge day-to-day impact. Everything in town is less than a 15-minute drive away. Traffic and parking are no longer a daily headache. It’s a walkable town, with safe, pretty paths and sidewalks that’s also home to many industries and professions, providing future career options for their growing kids.

But there are other benefits, deeper and more eye-opening. The slower pace of a smaller city allowed their family to relax, to breathe, to focus on quality time. Old traditions like family movies, and magic shows came back to life, and new traditions were formed. For Christmas, with the help of a Santa and Mrs. Claus costume, each child got to sit on “Santa-Daddy’s” lap and share their Christmas wishes.

“All the hustle and bustle… we kind of got swept up in the rat race. You don’t intend to, but when it happens, how can you find your way out?” Ryan paused, then said, “We came here for more space, and I ended up finding my family, and rediscovering what it means to be a family.”

For Ryan and Rhonda, they plan on making St. Joseph their forever home. They feel good about growing their family here and hope to stay for generations to come. It’s quite a revelation for a couple that has moved from city-to-city for the majority of their lives. But this is the first time they’ve felt this way about a place. It feels like home.